For the second time I had the chance to attend Akademy, this time in cold and rainy La Coruña. It has been a week of interesting talks, good food (except for one Tortilla incident), and hacking.

My personal highlight was obviously the introduction of Plasma Mobile on Saturday, an event that caused the one or other tear of joy. Later that day I gave a talk titled “Qt’s Road to Mobile Domination” (Update: Fixed link) looking back on what has improved with Qt on mobile platforms as well as what we can expect in upcoming releases.

One interesting BOF I attended was about LiMux where two guys from Munich shared their experiences with the Plasma desktop in an enterprise environment and what we could do to ease their eventual transition to Plasma 5 in a a few years, notably: Kiosk support, ie. locking down the UI so the user couldn’t mess it up, for which, at that very day, I wrote a proof of concept for making Plasma config dialogs smarter by automatically disabling elements whose backing config is marked immutable.

KRunner History is Back

Supposedly this was one of the reason I still saw quite a few people running Plasma 4 during the conference but now there’s no more reason not to do the switch! ;)

Press the down arrow key in an empty KRunner to show the recent entries. They’re not shown automatically for obvious reasons ;) After invoking a search result, its query will move to the top, so repeatedly used commands never fall out of the list – there’s a clear history button in settings.

The fancy zooming calendar overview I wrote back in February already has finally landed and will be part of Plasma 5.4; but it’s even cooler: it now supports pinch-to-zoom if you happen to have a touch screen (or you’re on the phone). 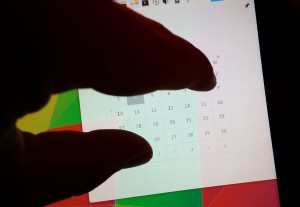 Tuesday, Together with the Visual Design Group we had a three hour talk through that Phoronix article™ where we discussed every single issue mentioned. Seriously. We do care. Even about the little things.

Additionally, I did a bit of cleanup in PowerDevil so it no longer annoys you that your battery is supposedly broken but this message has been moved into the battery monitor. Also, it no longer messes with your screen brightness by default when plugging in/out the AC adaptor.

It has been an amazing week with many great people that just passed by way too quickly. Looking forward to Akademy 2016!

9 thoughts on “Fruits of Akademy”